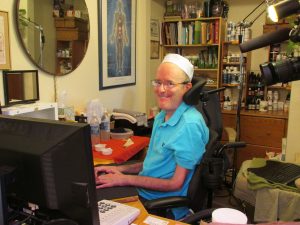 For those of you who do not know Eric Edney, he is a legend in the ALS world. Not only

has he survived ALS for a quarter of a century, he taken the time and trouble to share what he has learned with the world. He wrote the book Eric Is Winning, and then a second book, Surviving Without You MD. He has maintained a website for years, http://EricIsWinning.com for the benefit of all who want information on how to heal ALS. Eric writes a monthly updates. These updates, as a unit, contain the wisdom of a quarter century of experience. Eric’s book Eric is Winning and blog are a must read for anyone who wants to heal ALS.

We had the privilege of spending a couple of days with Eric and his wife Glenna back in 2010. We saw that he lived his principles and practiced what he preached. If the world were made up people with the heart and spirit of Eric and Glenna, it would be a much better place.

Eric Edney had his first symptoms of ALS when he was 59 years old. He recently celebrated his 84th birthday, 21 years after his first diagnosis in 1993. Not a person to just accept a diagnosis, Eric got a second, third and fourth opinion. He was diagnosed four different times by four different neurologists.

Eric’s ALS disease progression was typical at first. He lost muscle mass, he had increasing difficulty walking and using his arms and hands, and like most people diagnosed with ALS, ended up in a wheelchair.

Then after his fourth diagnosis in 1996, a doctor told him he has six months to live. His first reaction was tears, he and his wife Glenna holding each other mourning the loss of a bright future together. Then something clicked. He made a decision. He would do anything and everything he could to find an answer to this disease and heal.

Eric went to the library, read all he could about disease. He read about holistic healing and it made sense to him so he experimented with various holistic protocols. He kept reading and experimenting.

Eric is not cured from ALS, but he has stopped the progression, and reversed some of his symptoms. Not bad for someone who was given six months to live almost 20 years ago.

Sometimes people will say, “I read Eric Edney’s book, I tried his method but it didn’t work”. Yet when I ask them exactly what they did, it turns out that they did a few things in Eric’s protocol, but by no means all of it. I hear, “I can’t live without sugar”, or “eating organic is too expensive” or “I hate the dentist too much to get the mercury amalgams out of my mouth” or “I couldn’t possibly take all those vitamins.”

To heal from ALS you need to do everything “until”. Until your symptoms slow, stop then reverse. If you are still declining then you need to do more. It is like a puzzle. Perhaps you have missed a toxin somewhere that you are being exposed to, perhaps you are low on an

essential mineral, perhaps you have unresolved stress. Fortunately there are good holistic practitioners to help you solve the puzzle. Eric’s doctor, Neal Rouzier, MD is one of them. Two good sites to find one are http://functionalmedicine.org and http://acam.org.

The bad news is that it is not easy to heal from ALS. It takes belief, determination and persistence. The good news is that you can heal from ALS. We have seen it happen over and over again. As more and more people diagnosed with ALS follow the example of Eric Edney, it will become more commonplace, and maybe about 20 years after that, mainstream medicine will catch up. In the meantime, follow Eric. He is a winner. At 84 years old, he has won. He has beaten ALS.

Check out Eric’s latest post: http://www.ericiswinning.com/updates.html. And then please donate to our film to make sure others get this valuable information at http://HealingALS.org.